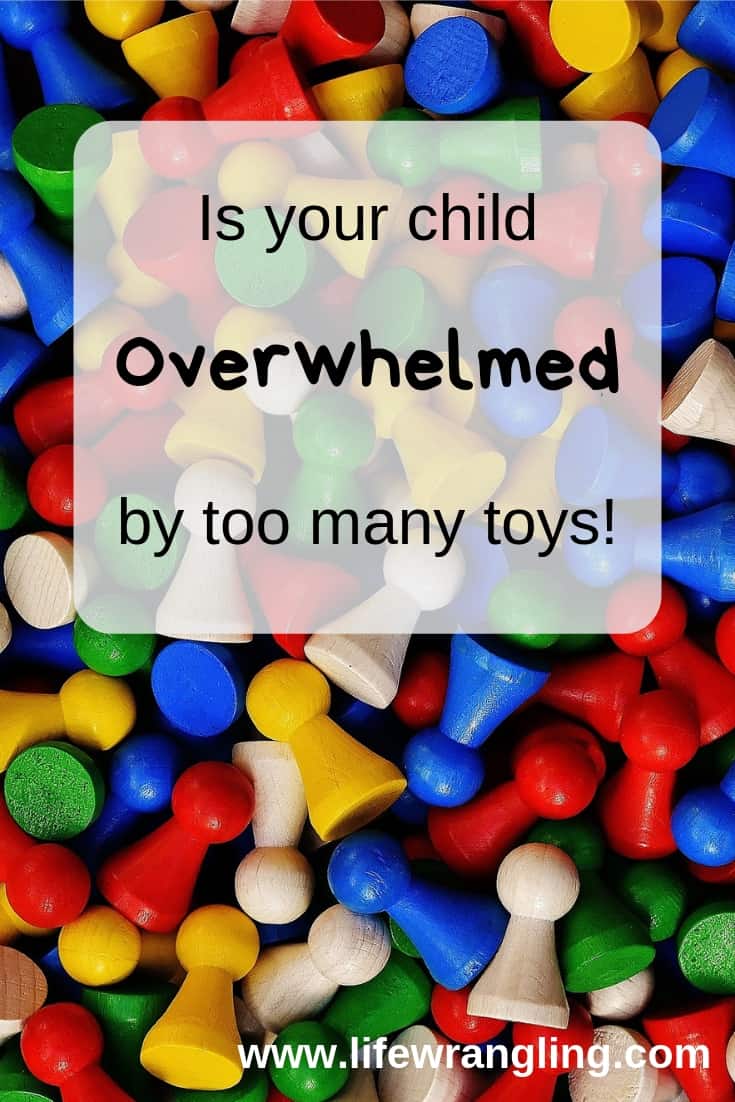 Do your children play with all of their toys? It’s an interesting question.

I remember a time when I arrived to pick up my son from his friends house where he had gone after school for a play. Both boys were about 7 years old at the time. When we were leaving I noticed that my son was not himself. In fact, he was in a really strange mood and before long he began to cry.

It took me a little while but I eventually got to the bottom of what was wrong.

He didn’t have time to play!

You see, even though he had spent two hours at his friend’s place, I had picked him up before they had had a chance to play. I couldn’t understand what was going on so I quizzed him some more.

He had spent two hours there, why didn’t they play? It turned out that the play room in the house was so full of toys that the boys just didn’t know where to begin.

The quantity of toys was simply overwhelming.

They spent the two hours sorting the toys rather than playing with any of them. In the end the whole thing was so overwhelming for the boy who owned the toys that all he wanted to do was watch a DVD instead.

How sad is that?

A house so full of toys that the children would rather watch a movie than go through the hassle of trying to find a toy to play with.

Evidence says that this is not an unusual situation.

A British study of 3,000 parents has shown that a typical child has 238 toys but plays with only about 12 on a daily basis. It is thought that part of the problem is that they just have too many to choose from and so revert to a few tried and tested favourites. This was certainly the case with my son’s young friend.

I decided not to allow this to happen in our home.

From that moment on I determined that we would never have so many toys in our home that the children found it too difficult to play.

We would carefully choose one or two simple, creative toys that could be used over and over again in many different ways.

A few of the favourites were:

Not all toys come from the store!

Perhaps the most enjoyment my son ever got was turning toilet rolls, masking tape and marbles into marble runs that spanned the length of the kitchen. Such creativity, problem solving and fun from something that didn’t cost us a cent.

What can you do to change things?

If your children are in danger of being overwhelmed by their toys, consider slowly getting rid of the least used items until the toys they own are at a more manageable number. Teach them how to manage their own belongings by deciding what to keep and what to donate and most importantly, packing up after themselves at the end of the day. A quick tidy up never goes astray.

Get advice and guidance on how to do this inside the Clutter-Free Life Membership Community. You will be pleased you took the first step to making a difference in your children’s lives.