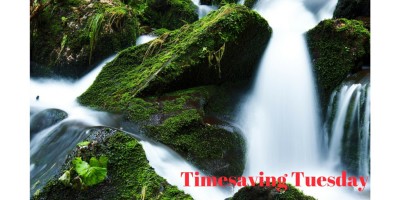 Our grandparents understood the value of taking the time to fix things.  Unfortunately in today’s society we do this less and less.  Perhaps we believe that we are too busy or that it is easier to simply throw something away and buy a new one.

If we think about things logically, we come to appreciate how long it actually takes to replace something we allowed to deteriorate until it was useless.  Not only is there the time it takes to go out shopping to find the replacement item, there’s also the time spent at work earning the money needed in order to pay for it.

A few years ago my daughter had a summer dress she absolutely loved.  One afternoon while she was playing outside, she caught the end of the skirt on something and tore it a little.  I remember looking at it and thinking that I should do something about it before the rip became too large.  Unfortunately, that’s as close as I got to actually doing anything.  It would probably have taken me no more than 5 minutes to repair it and that included finding the needle, cotton and scissors.  At the time however, it just seemed like too much effort.

You can see what is coming next can’t you?  That small tear very quickly became larger and larger until it was an obvious rip.   It took me significantly longer than 5 minutes to repair and it was very difficult to do a good enough job to avoid the rubbish bin and one very unhappy child.  I certainly wished I had fixed it much sooner.

A friend of mine recently shared a story about hearing a funny noise in the wheel of her car as she drove down the road.  She’s a busy lady and unfortunately just didn’t think she could spare the time to get it checked out.  She assumed that everything would be fine and continued to drive as normal.

It wasn’t until she was on the way to an important appointment that things ground to a halt- literally.  By the time she stopped the car, the wheel was so hot, it almost burnt her hand and she was very close to doing some expensive damage to the vehicle.  The mistake turned out to be much more costly in both time and money than it would have been if she had had checked it out sooner.

How often do you think you don’t have time to fix something or get it fixed?  Next time you find yourself in a similar situation, take a moment to consider how much the real cost in both time and money will be.

One thought on “Timesaving Tuesday- Fix it now”