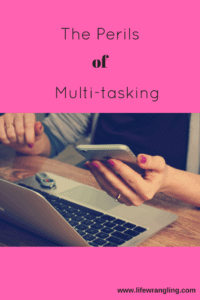 Sometimes life gets so busy and so overwhelming that we simply have no idea where to start or what to do next. We feel stressed and rushed. We feel like we are flying from one task to the next without being able to give our full attention to any of them.

I know that when this happens to me I start to do silly things. I forget that I have done something and can waste time doing it again just a few days later. The tasks that I do can be rushed and not done properly. I start to make mistakes that have an impact on other things.

Yes, you have lots of things going on, yes it can seem as if there are not enough hours in the day to do it all, yes you feel the pressure of all of those tasks left undone. In reality though, even though there are a lot of things that need to be done, we can only do one thing at any one time.

When you were concentrating on the one task in the first activity, it was an easy thing to do. The second time, when you were constantly switching from one task to the other, it required much more conscious effort and was considerably slower.

This is what happens to us when we are trying to do more than one thing at a time in our regular lives. We believe that we are multitasking. In reality we are simply switching quickly from one task to another. We think we are being hyper productive and achieving a lot. In reality we are wasting time and creating more work for our poor overstressed brains.

The effect on the brain

When we stop to do something else, it takes time for our brains to re-engage in the first task we were doing before we can achieve the same level of concentration we had before. If we worked on one task until it was finished we would not have that lost time in which our brains are trying to take us back to the point we were at previously. The task would have been finished earlier and then we would be able to move on to the next one.

With the pull of so many important tasks in our lives it can seem impossible just to spend time focusing on one thing. I understand that. I am constantly fighting the desire to switch up my tasks. As I write this I hear the washing machine beep and I know that the laundry is ready to hang out. It would be so easy for me to stop what I am doing, go out and hang it up and then come back. In the past I would do that. After all it only takes a few minutes.

What is the problem with that?

The problem is that very often while I am doing that I will notice other things that need doing so I stop to do those on the way. Then, if I do eventually come back to my writing (often that might not actually happen) I will have lost the train of thought I was on and have trouble getting back to it.

When you are on a roll, it's far better to go with it and work until the job is completed. Click To Tweet

I know that with so many competing important tasks it can be difficult to know what to do.

So what is the solution to this stress?

Work out what it is that needs to be done first. I like to order all of my tasks so I know exactly what I will do first, second, third and so on.

This might be as simple as putting a 1 next to the first task, or as complex as writing the time of day you plan to complete each one.

Start at the top of your list and work on the first item until it is done or done as much as you are able to do in the one sitting.

Still not sure how to make this work in your life. Check out my Lifewrangling Planner to help you prioritise and schedule those tasks so you have a more productive day today.