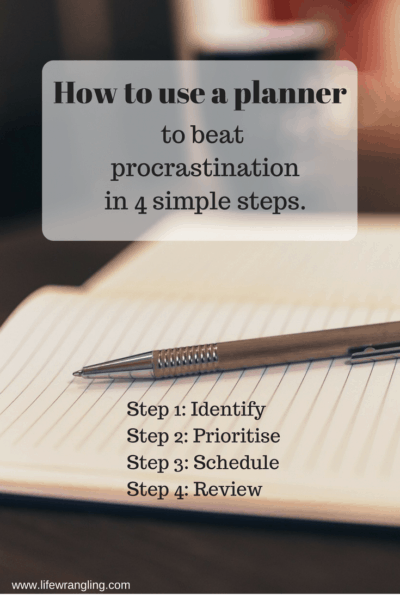 Sometimes it seems so difficult to find the motivation to do the things we need to do. I am good at being organised and planning my day and I still have to overcome procrastination on many different levels.

Last week there were a couple of moments when I could easily have allowed procrastination to take over.

Firstly I had to give bad news to a difficult person. There have been times when I would have procrastinated on doing this because I hate confrontation. I worry about the reaction I am going to get to my news so I put off giving it.

In the past I would have procrastinated on making the call and this would have done three things:
1) Caused me to worry about it until it was done
2) Created a bigger issue because they most likely would have found out from another source
3) Meant I then had to deal with the misinformation they had received

As you can see, procrastinating on this would have been far worse than simply buckling down and getting it done.

What did I do differently this time?

I wrote it on my schedule in my planner. That’s it. I wrote it down. I determined that it was an important task to complete and I identified a time to do it.

The same thing occurred when I had a difficult computer tech issue to deal with. I knew it was going to take a long time to resolve (I was right by the way). Knowing it would chew up a big chunk of my day meant that I found it hard to even think about, let alone begin.

Again, the thing that saved me was the fact that I had scheduled a specific time in my day to do it. My planner literally made me do it.

How did my planner make me do it?

I am the type of person who hates letting people down. If I tell someone I am going to do something, then I pride myself on doing just that. It is important to me that my word is something people can trust. As a result, I very rarely promise something and then not follow through.

This got me thinking. I wouldn’t plan to meet someone and then just not show up. I wouldn’t promise a colleague I would complete a task by the end of the day and go home without having done it.

How does writing a task in my planner help prevent procrastination?

By writing down my task and scheduling it into my day I am effectively making a commitment to myself to complete that activity. This works because I feel as if I am letting myself down if I have put off doing it. Of course there will always be times when my best intentions go astray due to factors outside my control but that is a different matter. If I have not done it simply because I procrastinated on it, then I have let myself down.

I am very careful not to commit myself to something carelessly. This means that there is less chance I will have to back out on my promise. The same can be applied to my own schedule. Thinking carefully about what to put on it before actually writing it against a timeslot solves most of these problems.

How does my planner keep me on track?

As I complete each task I take a green highlighter and highlight that item. This keeps me on track throughout the day. I can see whether or not I am getting ahead on my schedule or falling behind. Sometimes it’s necessary to tweak my planner because a task took longer than I thought it would or something else caused it to be pushed to one side. That’s OK. I simply adjust things as I go along.

What do I do next?

At the end of the day I review my schedule and move over any items I did not complete to the next day’s plan.

Here’s what I found this week.

As I was looking at my planner and came to the item about making that difficult call, I seriously considered putting it off. There were plenty of other things I could be doing in that time and I almost convinced myself I could use that time for them. Almost. Procrastination almost beat me!

Then it occurred to me… If I didn’t get it done today, I would have to write it on tomorrow’s schedule. I would need to find a new time to complete that task. The task would not be any easier tomorrow and might in fact be more difficult due to the time lapse that would have occurred.

The idea of having to write it down again was more disagreeable than just doing it when it was first planned. It would have meant that I had failed to keep the promise I had made to myself when I wrote the item down on the schedule in my planner. I deserved to treat myself better than that.

What I have learned is that: If I don’t schedule it, it doesn’t get done.

The four planning steps I use to overcome procrastination are:

1) Identify: I find out what needs to be done
2) Prioritise : I decide what needs to get done today
3) Schedule: I take each item that must be done today and allocate a time to do it
4) Review: I regularly revisit the schedule to make sure I am on track

To help me manage my busy life I have developed the Lifewrangling Planner.

I use it to help me work through each of the four steps to managing my to do list. Check out the benefits here.

For more information on creating your Organized Lifestyle, click here.

11 thoughts on “Procrastination: 4 Easy Planner Steps to Help Overcome it”