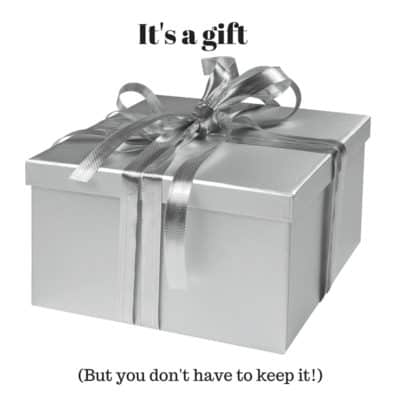 Perhaps one of the most frustrating things when trying to reduce the amount of stuff we have in our homes occurs when we inherit other people’s stuff. This could literally be inheriting the belongings of a relative or simply being given things by well meaning friends and family.

Sometimes it can be difficult for people to understand that you might want to do something differently to the way they like to do it. For example, we regularly hold barbecue breakfasts at our house for extended family and friends. We are a little bit unusual in that we like to cook our toast straight on top of the gas burner using a camping toaster.

This tends to surprise people who don’t know us very well and makes them:

a) Wonder about our sanity
b) Want to give us a toaster.

Despite all of my protests I am now the reluctant owner of a four slice toaster, given as a Christmas present. I didn’t want to appear rude and ungrateful so I smiled and said thank you and then my thoughts then went immediately to wondering what on Earth I was going to do with it.

Re-gifting was going to be difficult because, really, who gives another person a toaster? Throwing away a brand new toaster is not something I am happy doing and they don’t take electrical good as donations at our local charity shop so that was out. The last option wasn’t going to be any good either because I seriously don’t like the way toasters make cardboard out of a perfectly good piece of bread.

Solution? Well, I will be honest and say that we have kept the thing. It lives in the back of a cupboard in the kitchen and gets pulled out whenever we have our BBQ breakfasts. It does get used but rarely. I feel that this compromise has made everyone happy but if I ever need that cupboard space, you can be sure that the toaster will be the first thing to go.

Apart from situations where people can give you a gift, I have found that quite often well meaning friends and relations try to give us things they believe we will want or need, even if we clearly don’t. I am a big fan of taking things to a charity shop but others would rather give things they no longer want to people they know. What do you do then if someone is trying to give you their junk and assumes that you will take it?

You have a couple of options here.
1) Say no and don’t take it
2) Take it and donate it straight to charity

The most direct approach is to simply say thanks but no thanks. Explain to them that you would not make the best use of it and it would be better off given to someone who would appreciate it more. A reasonable person will accept the fact that you have no need for the item and will stop trying to foist it upon you. This might be difficult for a couple of reasons though. Perhaps you are not dealing with a reasonable person or perhaps you have trouble saying no to anyone’s requests. If this sounds like you, you might benefit from learning how to say no in a variety of situations.  Check out the free guide here.

I realise that some people can be difficult to say no to. They believe that they are doing you a favour by giving you their unwanted things and they don’t understand why you might not want to take them. These people need to be treated very carefully. You don’t want to ruin an otherwise good relationship over something like this.

If you find yourself in a situation where you simply cannot gracefully say no, you can consider taking the item and then donating it to charity. The obvious problem with this is that they might one day want it back. I have been in this situation too. I thought something was given to me because it was no longer wanted and then after a few months, I was asked to return it. Unfortunately I had already passed it on to someone else. That did that put me in a difficult position! Be sure to check in advance for this eventuality.

So if you do find yourself in this type of situation in the future, put your needs first and stop that unwanted stuff from entering your home. You might be surprised to discover that people actually respect you for saying no to their things. Give it a go. You have nothing to lose, only the junk.

Need to get the house sorted out quick?

Join the newsletter and get instant access to the "Quick Declutter Checklist".

Success! Now check your email to download your checklist. The email may have been filtered by your provider. Please look for it. If you don't see the email, check your spam or promotions folder.

12 thoughts on “Managing other people’s stuff”