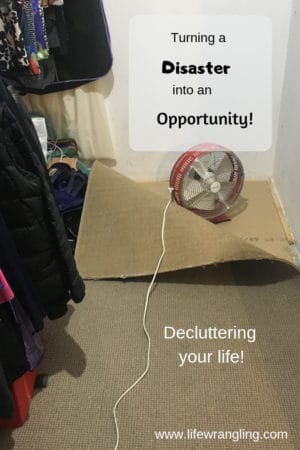 I’m writing to you today from my walk-in robe or closet, depending on what part of the world you’re from. That might seem a little bit strange but stick with me and I’ll explain why I am here. We took what could have been a disaster and turned it into an opportunity to declutter.

On the other side of the wall is the bathroom. It turns out that we have a little bit of a water leak in there and the water has been coming through the wall into the closet. It appears to have been happening for a while but we didn’t know because we had some boxes stored in there.

When we removed the boxes we discovered that everything under them was covered in mould. There was mould on the carpet, under the carpet and water seeping out of the wall.

So, we had a little moment of ‘oh my goodness this is going to be a big problem’ but then we stopped and made a plan. We called the insurance company and they sent their assessor out to investigate. He was concerned about the mould and quite convinced that we had a leaky pipe. Since the mould is such a health risk, he sent someone to sort it out.

In preparation for that, we had to remove everything from the closet. Some chemicals were sprayed onto the carpet and then we set up a fan to help dry it all out. I’m happy to say that the mould and the smell is gone.

As it turned out, there was no leak, it was simply some missing grout in the shower that was causing the problem. Not actually having a leak meant that we saved the $700 insurance excess and did not have to have the wall pulled apart to find and correct it, so that was a big plus.

I have to say that I did quite enjoy getting stuck into repairing the grout in the shower by myself. It was very rewarding to get it looking so nice.

(How white does that grout look?)

Probably the most time consuming part of the whole process was having to remove all of the items from the closet. We had all sorts of things stored in there. These include clothes, shoes, handbags, suitcases, towels, paperwork and of course the boxes. We even had a pigeon hole style piece of furniture at the back which was great for storage but really did take up a lot of space.

Rather than seeing this as a problem however, we took this as an opportunity to clear this wardrobe out and start afresh. It was a chance to decide what we really did and did not want in there. The first thing to go was the pigeon hole storage unit. Sure, it was great to put things on but it took up a lot of space and by the time we had finished, we didn’t have much to store in it anyway.

(It was a bit cluttered!)

We went through all of our coats and our shoes and decided whether we still needed them, whether the clothes fit, were still in good condition, whether we had too many of the same item and if they had been worn in the last 12 months.

Then it was time to sort through the paperwork. Things that were important to keep a couple of years ago were now no longer needed and could be thrown out. The other pieces simply needed to be filed correctly. You know how it is, something comes in to the house and you are too lazy at the time to file it correctly so you simply shove it into a likely spot and go on with your day. Well, there does come a time when it is necessary to sort it all out and deal with it properly. Of course this would have been better to do at the time but we are all human and life happens.

Not putting the pigeon hole unit back against the wall has created so much more space in the closet as well. Now we don’t have to take it in turns to go in there and get our clothes as there is room for both of us at the same time. It’s so much easier to find what we have as well because there are now only a couple of spots where they might be.

So, what could have been seen as a disaster, we turned to our advantage and we now have a much nicer walk in robe with far less stuff to manage.

Not sure if you can do it by yourself? Get support in your decluttering journey with the Clutter-Free Life Community. Check it out here.