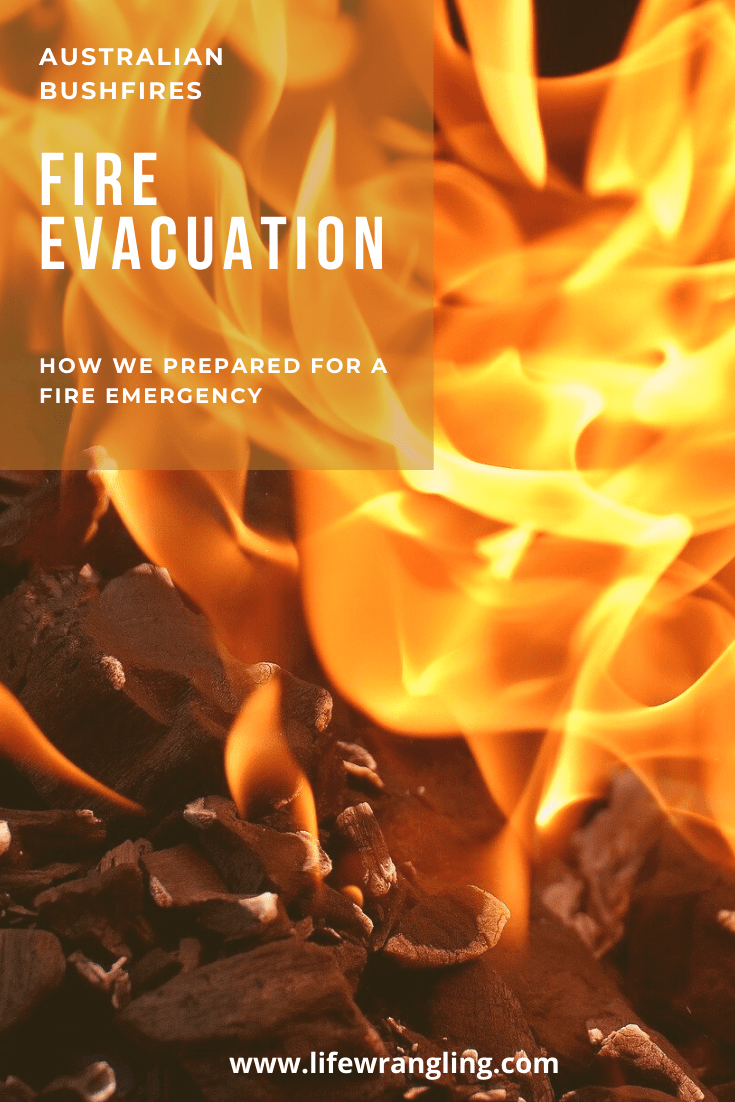 It would be a rare person in the western world who doesn’t know that Australia has been in the grips of a fire emergency recently. There have been many horrific and catastrophic fires across the country that have caused much loss of bushland, homes and lives.

Whilst we are on the opposite side of the country to the Australian bushfires making international news, we have had a couple of close calls on our little patch of ground too. We live in a semi-rural area not far from the suburbs but our block backs onto a nature reserve. This means that if a fire is burning to the south of us, we could be in serious danger.

While rare, we have had a couple of worrying events in the years we have lived here. None scarier though, than two that have occurred in the last week alone. Both accidental fires, caused by boats, of all things, these have set the bush ablaze in an area a little too close to us for comfort.

During the first fire we were in an alert zone (we began packing just in case) but the second fire put us in an area recommended for evacuation. My daughter and I took it upon ourselves to pack the car while the boys managed the emergency firefighting preparations outside. The girls were preparing to evacuate with the important items we did not want to leave behind while the boys were intending to stay and defend. We had time to consider what we needed to take with us and to calmly enact our evacuation plans. Our ability to do this efficiently is in part due to our preparations long before the emergency situation arose.

The following information is not an emergency packing list or designed to be followed in the event of an urgent evacuation, it is what we did given that we had some time to stop and think about packing, versus purely saving our own and our animals lives.

The best time to be thinking about an emergency evacuation is long before any type of emergency occurs. Consider if you will leave or stay and defend, where you will go and the different escape routes available depending upon the source and direction of the emergency.

We are fortunate in that once we leave our driveway, we have 3 different escape routes at our disposal: east, west and north west. All lead out away from bushfire prone areas into suburban neighbourhoods where we can find emergency accommodation. The direction of the approaching fire will determine which way we choose to travel.

Since we are aware that fires are not an unexpected event in our area, we have made sure that we have prepared in advance as much as possible.

For us, preparing in advance means…

After the fire box was packed, we put together an overnight bag each with necessary items such as clothing for a couple of days away from home. This was quite easy since we are experienced at travelling very light and our minimalist lifestyle means that we don’t own a huge range of items to choose between anyway. Less is certainly more in this situation.

Our criteria for what to pack next was based upon what could not easily be replaced if the worst happened and all was lost. For us, the decision making was made easier by the fact that we have gone through our belongings in the past and decluttered a lot of the unnecessary items. We had time to pack up things such as photo albums, a couple of small family heirlooms and some other precious odds and ends.

Fortunately there was a last minute wind change and we did not have to go so far as actually driving away but it was a close thing.

What can we learn from the Australian Bushfires?

My take-aways from the situation are that, when you don’t own a lot of stuff, it is much easier to see what you have and to determine what is important and what is not. Our decision making was really easy and fast to complete as a result.

Less stuff makes it easier to decide what is important to take with you.

Deciding what is necessary and what is not, can be difficult to do. This is a decision that is made much harder in times of stress and when we have a home stuffed full of possessions. I recommend reducing the amount of items in the home to a manageable quantity and identifying the important items well in advance of any emergency situation.

Less stuff makes it easier to find the important items you want to take.

When everything has its designated place and you consistently put things where they belong, it is easy to put your hand on exactly what you want when you need it in a hurry. This reduces the amount of time it takes to be ready to evacuate and reduces the stress involved.

Less stuff means an easier evacuation in case of house fire in the night.

You don’t want to be tripping over your belongings in the event that you need to leave in a hurry in the dark. A clear floor and easy exit route in this situation can make the difference between life and death.

Even those who live in suburbia are not immune to these types of events. Flying embers can take hold in roof spaces of homes that would seem to be too far from any danger areas to be at risk. There is also the risk of electrical fire causing an evacuation emergency, a situation which could happen in any dwelling.

Have you taken a few minutes to prepare your fire evacuation plan? It could save your life and the lives of those you love.

Want to get a quick start on your decluttering project?